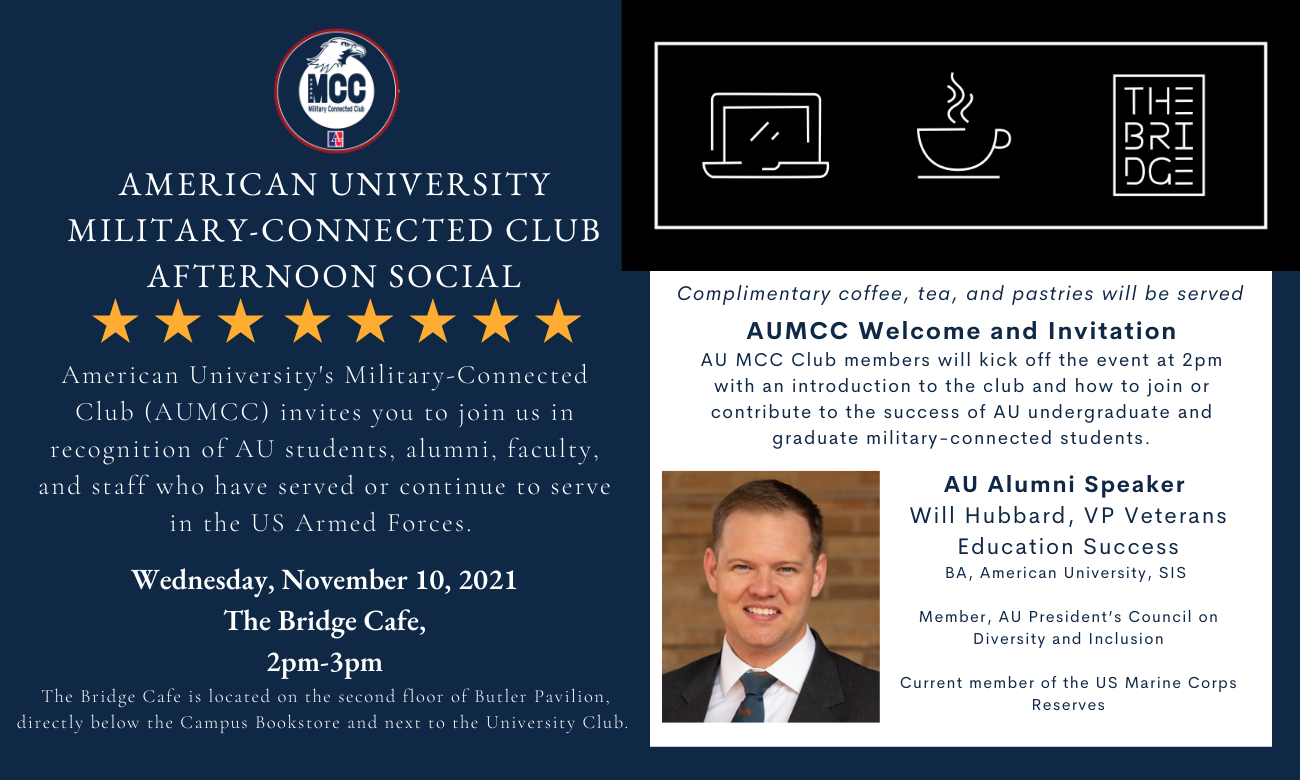 American University’s Military-Connected Club (AUMCC) invites you to join us in recognition of AU students, alumni, faculty, and staff who have served or continue to serve in the US Armed Forces.

Complimentary coffee, tea, and pastries will be served.

William Hubbard serves as the Vice President of Veterans & Military Policy at Veterans Education Success, focused on advancing higher education success for service members, veterans, and their families, and protecting the promise of federal education programs. Previously, he served as the Vice President of Government Affairs and Chief of Staff for Student Veterans of America. He has been frequently called to testify before Congress on a variety of topics related to higher education and veterans.

Prior to his roles in higher education advocacy, Will worked as a Federal Strategy and Operations Consultant at Deloitte for several years, where he served government agencies including the Department of the Navy, Department of State, and the State of Indiana Department of Revenue. He also served as a National Executive Committee Member of Deloitte’s Armed Forces Business Resource Group.

Will joined the Marine Corps Reserves in 2007, and continues his service today, based out of Bolling Air Force Base in Washington, DC. He most recently deployed to Kabul City, Afghanistan, where he served in the Special Operations Joint Task Force as a member of a small cell of intelligence professionals. He also worked with Southern Command (SOUTHCOM) to conduct activities in Honduras, Guatemala, and El Salvador, and humanitarian assistance/disaster relief in Haiti.

He serves on the American University President’s Council on Diversity and Inclusion, is a member of the U.S. Small Business Administration’s Interagency Task Force on Veterans Small Business Development, and is an Advocacy Advisor for the National Marrow Donor Program. Will graduated with a bachelor’s degree in international studies from American University and has a certificate in Diversity, Equity and Inclusion in the Workplace from the University of South Florida. He presently resides in Arlington, VA, with his wife and daughter.